Create a campaign to deliver your Google Ads message.
To create a new campaign: 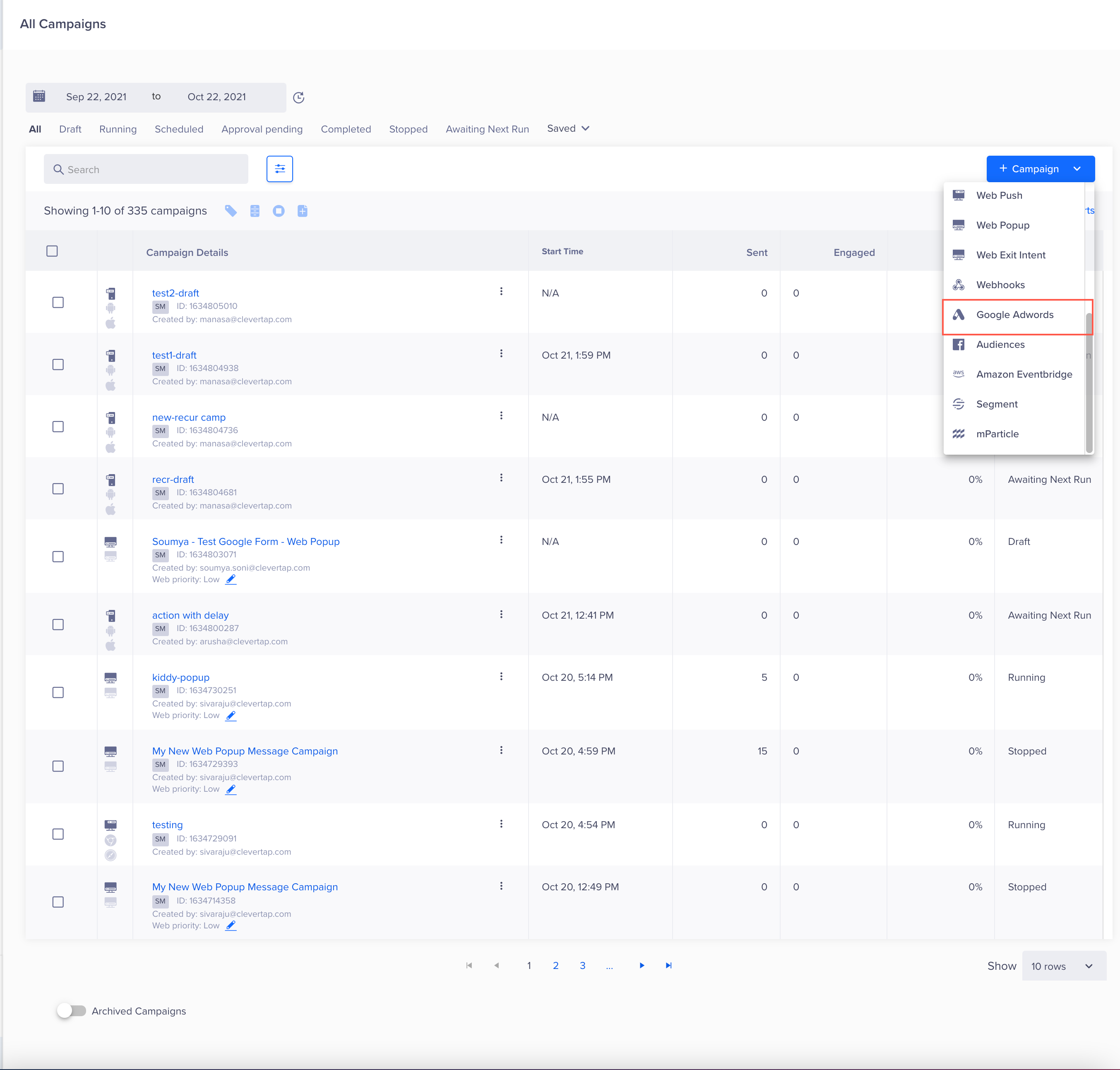 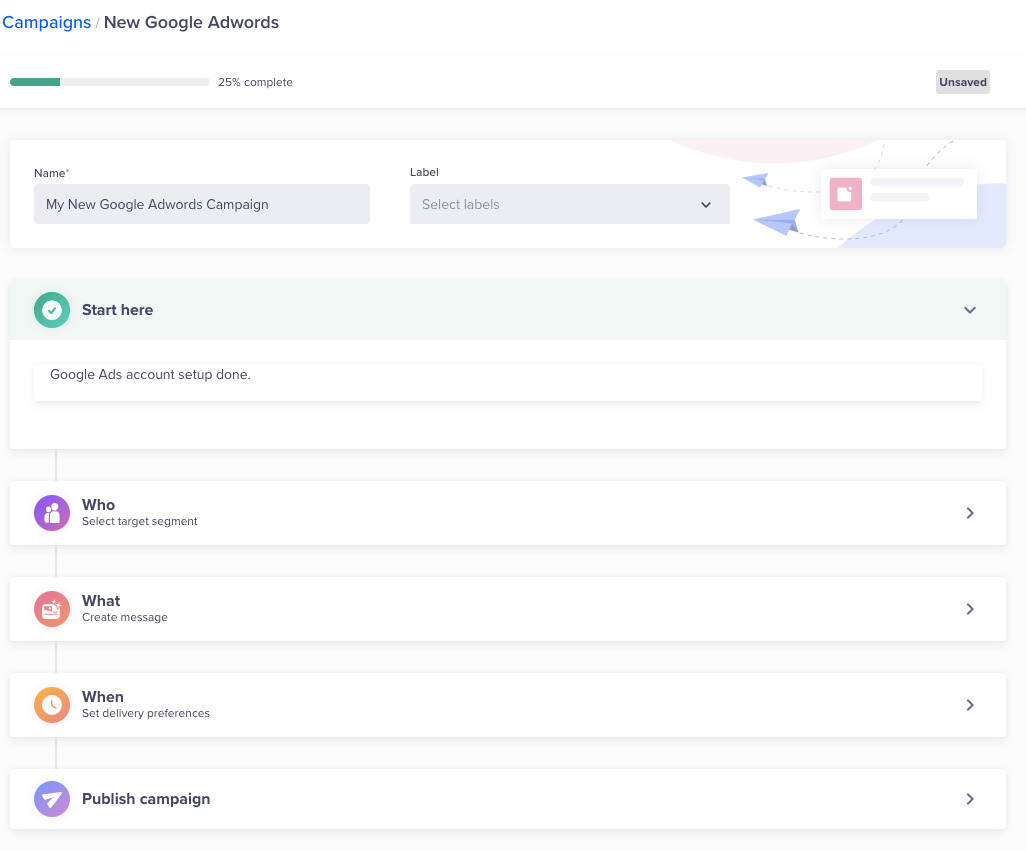 Define all the sections and publish the campaign.

This section has the following parts:

When the account setup is done, the following message is displayed and you can now create a campaign:

You must indicate the target audience for your Ads campaign. You can specify your target audience from the Target segment section. Here, you can create a new segment or use a previously saved user segment from the segment list.

For Past Behavior segments, you also calculate the Estimated reach. 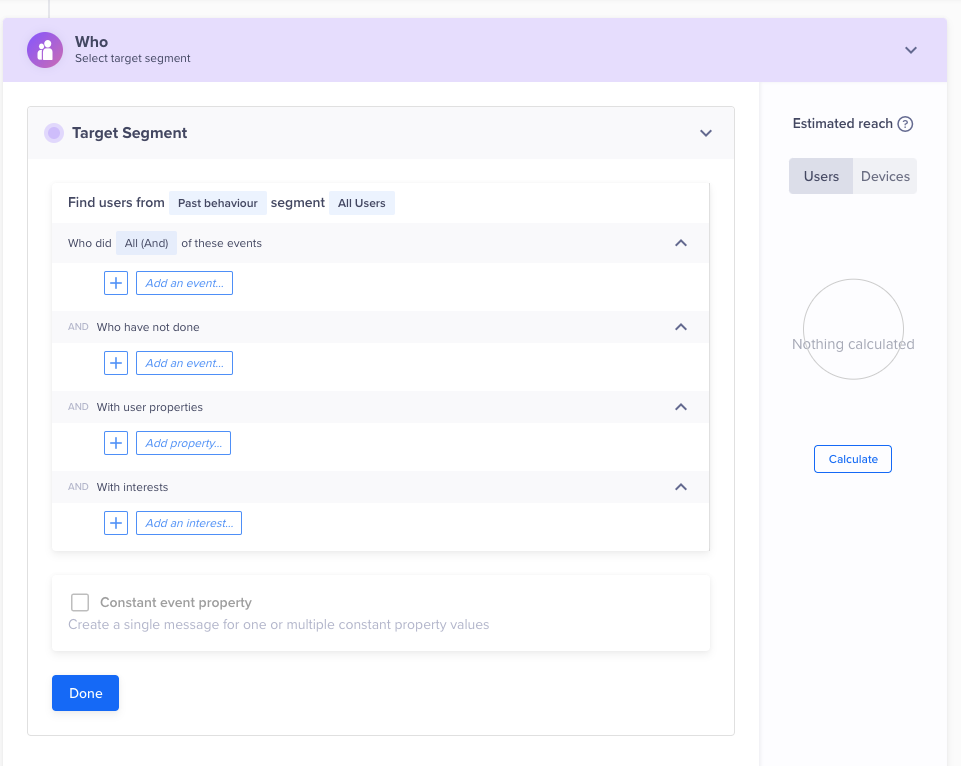 If you want to create an ad-hoc segment, you can select a type of segment on which to base your Ads campaign. You can create the target based on past user behavior and user properties.

Deliver Ads Notifications based on Past Behavior (PBS)

You can also target users their past user behavior. For past behavior campaigns, you also have an option to calculate Estimated reach. The estimated reach shows the number of users that qualify for the campaign criteria and the number of reachable users.

Using the With user properties filter in the Who section, you can segment your campaign to only reach users who meet specific criteria.

For example, you can send an Ads notification to English-speaking female users who live in the United States.

To know more about what segments can be used, see Segments.

Now, you can set up the What, which is the Ads campaign content. Click Go To Editor to create your message.

You can either append an existing audience list or create an audience list. Select the user details such as Email or Phone that you want to upload to this list.

Check that you have available CRM lists before adding users. 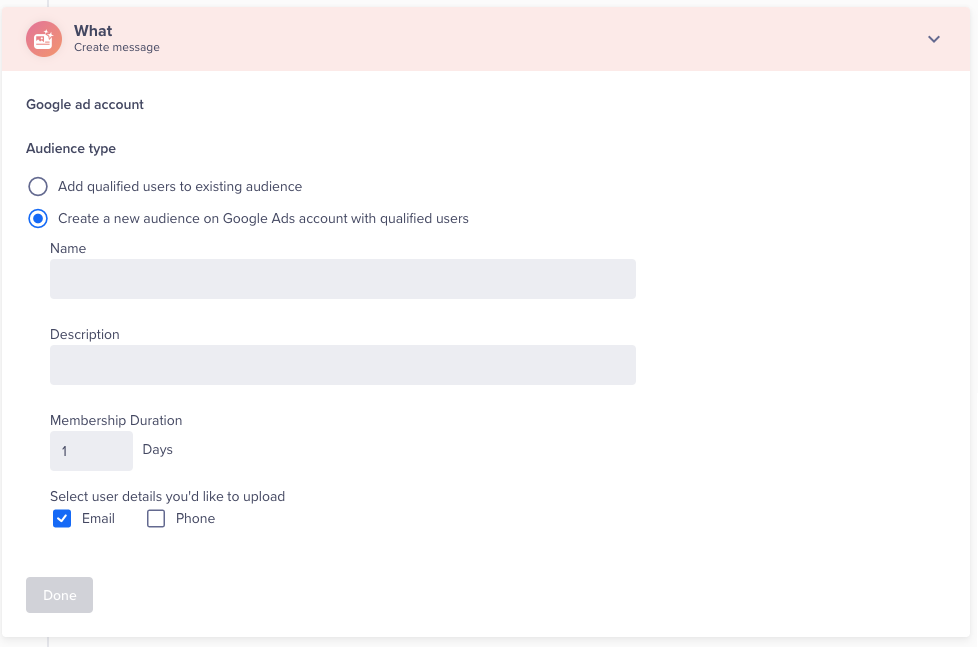 You can set up the When to schedule the campaign start and end using the options below:

The delivery preferences for Past behavior campaigns can be set as follows:

You can also click the Advanced checkbox to specify Do Not Disturb (DND) hours during which notifications from this push campaign are prevented from going out, either by discarding them or delaying delivery after DND hours, such as 9 PM to 9 AM.

Since past behavior campaigns can have scheduled times, you have the option to stop a campaign delivery after a certain cut-off time, or even deliver at the specified time in the user’s timezone. For more information, refer to Delivery in User’s Timezone.

If you specify a recurring day for a campaign such as the 7th of each month, then the campaign will start for the specified day and ignore the creation date. This is a precaution to avoid sending a campaign unintentionally on a prior date.

After testing and previewing the appearance of your campaign, finalize your campaign by clicking Publish Campaign.

Updated about 2 months ago