Create a campaign to deliver your message.
To create a new campaign:

Define all the sections and publish the campaign.

This section has the following parts:

The campaign goal can be as generic or as specific as you want. It can answer questions from How many users were influenced for purchasing an X amount? to How many first-time visitors purchased red shoes worth a minimum of X amount and blue jackets worth a minimum of Y amount? ".

You must indicate the target audience for your campaign. You can specify your target audience from the Target segment section. Here, you can create a new segment or use a previously saved user segment from the segment list.

For Past Behavior segments, you also calculate the estimated reach.

If you want to create an ad-hoc segment, you can select a type of segment on which to base your campaign. You can create the target based on past user behavior and user properties or live (ongoing) user behavior. The latter is helpful to send out real-time, triggered campaigns.

For instance, you can create a live Inaction within time campaign that targets users as soon as they add a product to their cart but do not finish transacting within 10 minutes; that is the golden window within which most users transact on iOS and Android app platforms.

You can trigger a message based on an action. Users receive messages when they perform an action in the app instead of waiting for the next app launch. It makes the messages more contextual and increases conversion. Campaigns with delays and app inbox coupled with a push message do not trigger instant messages.

Deliver Messages based on Past Behavior (PBS)

Using the With user properties filter in the Who section, you can segment your campaign to only reach users who meet specific criteria.

For example, you can send a push notification to English-speaking female users who live in the United States.

To know more about what segments can be used, see Segments.

You can also hold a property constant across the selected events. For more information, see Constant Event Property.

You can define the control group to compare and measure the results of your campaign. For more information on control groups, see Control Groups.

You can limit the number of users receiving the message.

Ensure that you set up a limit of 100 or more, regardless of the qualified user segment size. If the limit specified is less than 100, an error occurs.

This section explains the campaign creation flow when you are determining who to send your message to. Under the Estimated Reach section, select the option to limit the delivery of the messages to a specified number.
The campaign limits can also be configured using the following options:

For triggered campaigns based on live user segments, the users receive a message as they qualify until the total quantity specified has been delivered after which the campaign ends. For campaigns based on Past Behavior Segments, we randomly select the users who receive the message.

Now, you can set up the What which is the push campaign content where you have four different options. Click Go To Editor to create your message.

Select the templates and create a message. You can also get inbox previews and spam reports for your email message before you send out the campaign. For more information on the Email editor, see Email Editor. 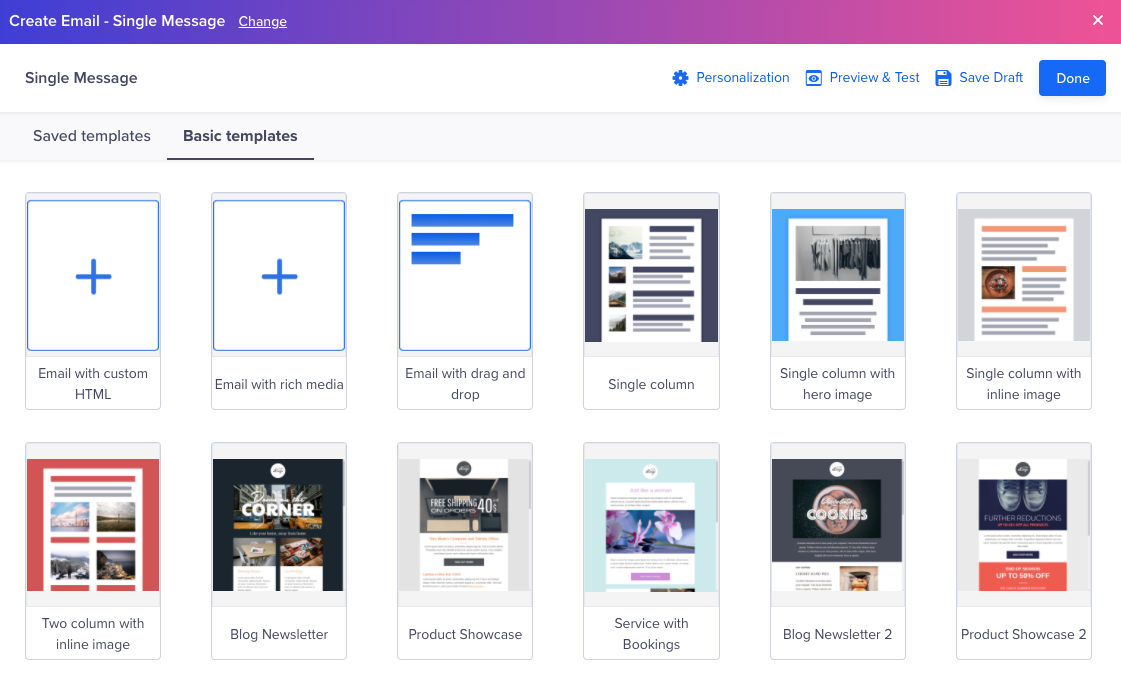 After setting up the content of your campaign in What section, you have the option to send a test email notification to any CleverTap user profile you have marked as a Test profile .
Click the Preview & Test button from the message editor to test a message.
You can also check view Inbox Previews and Spam Report.

You can create the following types of messages:

In this campaign, we send the same message to all users who qualify as your target audience. This message type is best for broadcast messages and for applications that do not vary campaign communication based on differences between properties such as language, geography, or any other user properties.

A/B testing helps you understand what type of message copy works best to get clicks from users.

You can test up to three message variants on a test group and the variant that gets the most views is declared the winning variant and is automatically sent to the rest of your target audience.

When you create multiple variants for a campaign, you can also auto-copy what is already present in a current variant.

With split delivery, you can decide what percentage of your audience receives each message variant for the duration of the campaign.

Split Delivery to Past Behavior Segments

For campaigns sent to Past Behavior Segments (grouping of users based on what they have done in the past), you have two options: launch the A/B test to a percentage of your target audience or send out an absolute number of messages. In either case, we deliver the variants equally to the test audience.

After all 300,000 messages have been delivered, we calculate the winning message over this test group based on the number of views. We then automatically send the winning message to the remainder of your target audience which is 1,700,000 users in this example.

Note that for A/B testing, we ensure there is always an equal number of messages sent for each variant, so there is no bias introduced during the test phase and that the best-performing message is always declared the winner.

With campaigns sent to live user segments (triggered campaigns), messages are delivered immediately when a user’s activity matches the criteria you have selected. For example, you can send a message when the user has completed a booking or purchase. Since it is not possible to determine the reach of triggered campaigns upfront, you need to decide how many total messages to send for A/B testing before a winner is declared.

If you select 500 users as your test audience, we will alternate delivery of Variant A and Variant B as users qualify for the campaign. After a total of messages are sent (Variant A – 250 and Variant B – 250), we then decide the winner based on the number of views and continue only with this winning message for the duration of the campaign.

Deciding on a test audience for A/B testing triggered campaigns requires some estimation. We recommend you check the total messages that were sent for similar triggered campaigns in the past to get a sense of how many users may qualify. If you select a test audience that is too small such as 25 users, you will get a statistically insignificant sample. If your test group size exceeds the total number of users who ultimately qualify for that campaign, then no winner will be declared and each message variant will be alternatively delivered for the duration of the campaign.

If you would like to send different message variants to your target audience based on the user properties they possess, this campaign type is your best bet. A good example would be when you want to send a localized update to people based on their preferred language.

Similar to creating A/B test variants, you can use the + button to add multiple variants based on a user property value. In the example below, we have used the Customer Type user property so users with different customer type property values will receive corresponding copies of the campaign based on their different levels (Silver, Gold, or Platinum).

You can set up the When to schedule the campaign start and end using the options below:

Past behavior campaigns can be scheduled to run:

Live campaigns can be set up on a specific event:

You can also Do Not Disturb (DND) hours during which notifications from this push campaign are prevented from going out, either by discarding them or delaying delivery after DND hours complete, such as 9 PM to 9 AM.

Since past behavior campaigns can have scheduled times, you have the option to stop a campaign delivery after a certain cut-off time, or even deliver at the specified time in the user’s timezone. For more information, refer to Notification delivery options.

If you specify a recurring day for a campaign such as the 7th of each month, then the campaign will start for the specified day and ignore the creation date. This is a precaution to avoid sending a campaign unintentionally on a prior date.

Updated about 2 months ago