CleverTap offers a multitude of delivery options for your users. This allows you to message your users when they are most likely to be interested and provide high engagement rates.

CleverTap gives the option for delivering notifications in the user’s timezone while creating scheduled campaigns or journeys. This is a relevant feature for businesses that have international users and who want to send time-sensitive notifications to their users. If you select this option, CleverTap staggers the delivery of notifications and qualifies users according to their timezone.

To set the timezone of the users, push it via the Tz key in the profile update push.

When setting up a campaign to be delivered in the User’s Timezone, distinguish between the timezone of your Account (Account Timezone) and the local timezone of the users receiving the campaign. 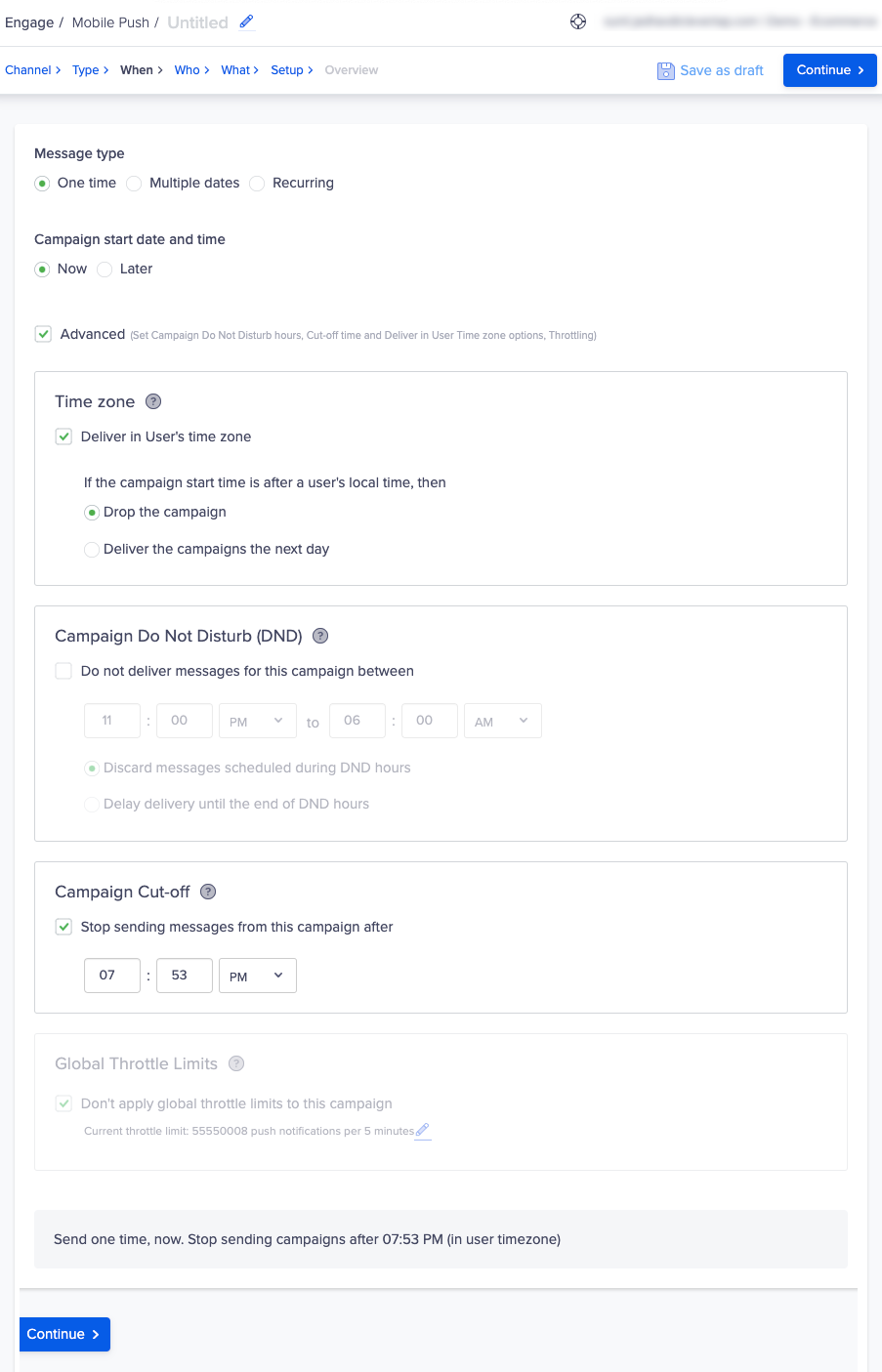 For example, a marketer in San Francisco (Pacific Time) creates a campaign at 4:14 PM in their CleverTap Dashboard. The campaign is scheduled to deliver messages to users at 8:00 PM in their local timezone.

After the marketer finishes creating the above campaign, it moves into a Scheduled state as shown here.

After the campaign starts executing it moves into the Running state and you can see that the campaign is scheduled to deliver in user timezone on the Overview page.

There are two additional delivery options: Drop the campaign or Deliver the campaigns the next day.

How these delivery options work:

For example, you are located in the Midwest (Central Time). At 11:30 AM. A lunchtime campaign has been scheduled to be delivered in each user’s local time. As above, the Campaign Start Time is set to 12:00 PM and the first set of messages will go out at noon Central Time. Two hours later, West Coast users receive the campaign.

Because this campaign was initiated at 11:30 AM Central, it was already 12:30 PM Eastern Time, which is after the specified delivery time for the East Coast users.

The campaign continues to deliver messages in each timezone moving from East to West until it reaches the first timezone.

If Drop the campaign was selected, any user whose timezone had already been passed when the campaign kicked off will not receive this campaign.

If it is critical for a campaign to be delivered on a certain calendar day (for example, an Easter campaign) and the message must arrive on Easter Sunday or not at all, choose the “Drop the Message” option.

You can increase conversion by delivering messages in the user's timezone. Let us consider the same example as campaigns. A marketer is located in the Midwest (Central Time). A lunchtime Journey has been scheduled to deliver messages in each user’s local time. The first set of messages following a past behavior segment is set to go out at 11:30 am Central Time. Two hours later, West Coast users receive the message.

Because this message was scheduled to be delivered at 11:30 AM Central, it was already 12:30 PM Eastern Time, which is after the specified delivery time for the East Coast users. The message is delivered the next day for the users for whom the time of delivery has already passed.

The Journey continues to deliver messages in each timezone moving from East to West until it reaches the first timezone. 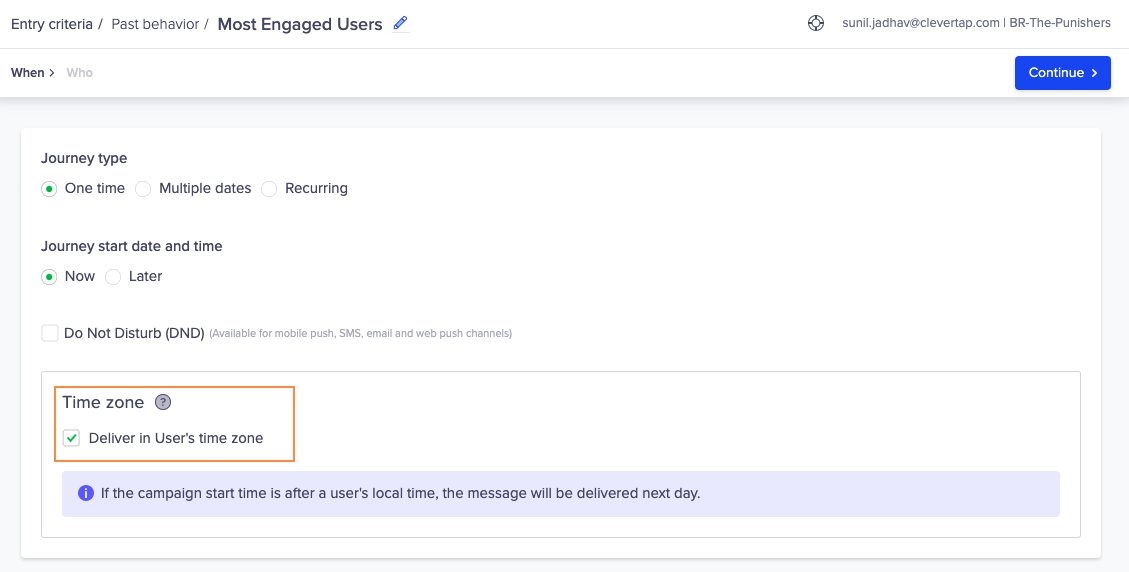 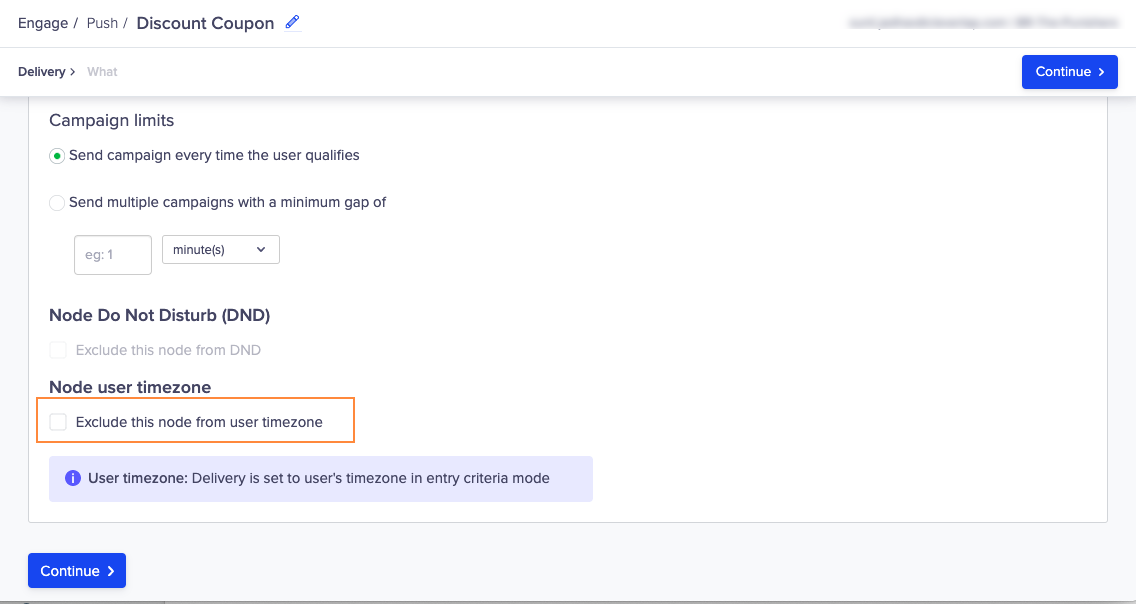 Do Not Disturb Hours

CleverTap gives the option for setting the Do Not Disturb hours for notification delivery while creating a campaign. You can set this to ensure that the users who get qualified for the campaign are not disturbed during the specified DND hours. 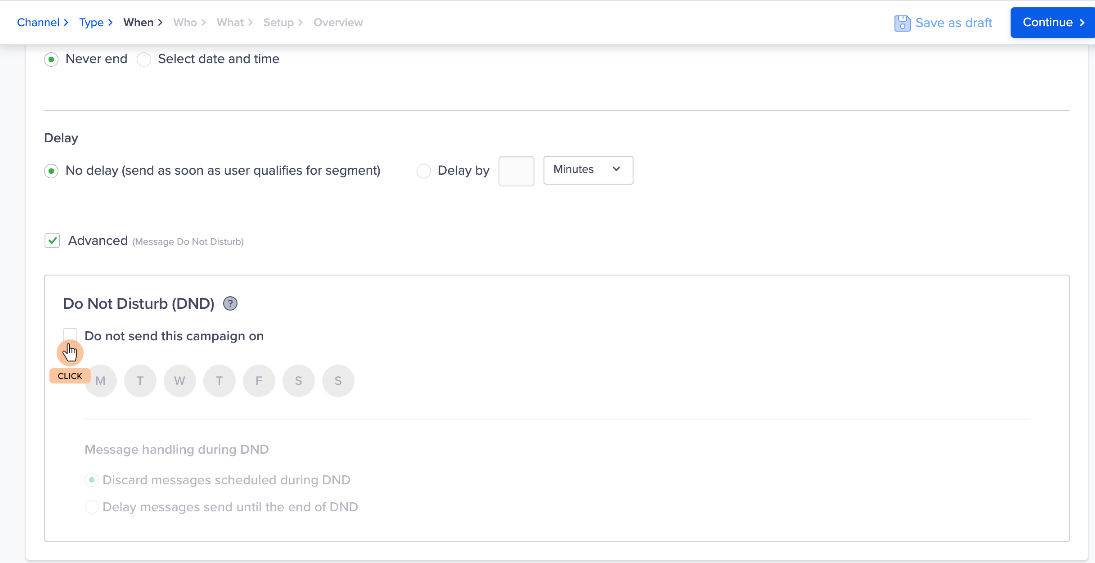 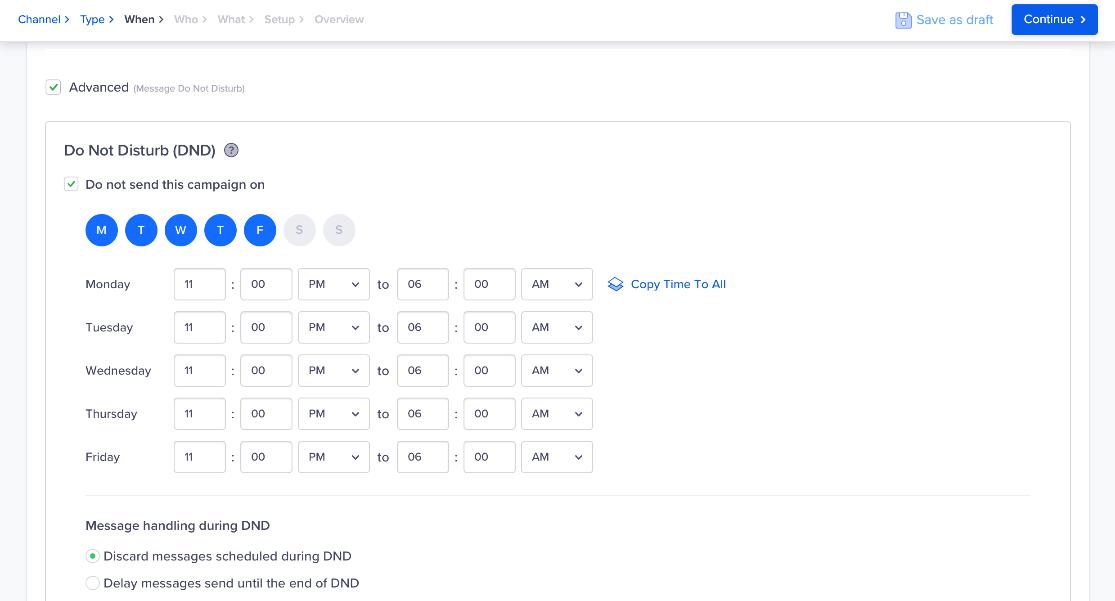 Campaign frequency provides the ability to define when the messages should be delivered. If a user qualifies outside this window, the message is discarded. 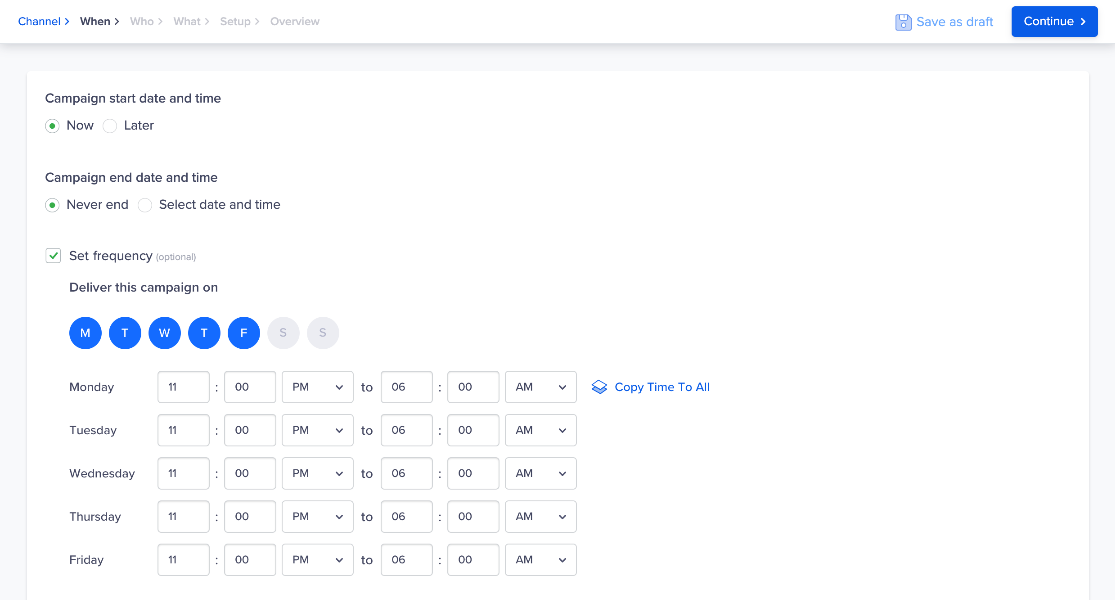 CleverTap gives the option for setting the campaign cut-off time for every scheduled campaign while creating it. You can set this to ensure that the delivery of notifications is stopped after the specified cut-off time. This is useful if the campaign is time-sensitive and if the notification will not be relevant later.

If you have multiple marketing campaigns running simultaneously for any one channel (Push, Email, and so on), the same user may qualify to receive a message from more than one campaign in a given day (or week/month). Frequency Caps allow you to limit the number of notifications a user will receive from all the campaigns running for that channel.

Frequency is channel-specific. Frequency Caps allows you to limit the total notifications received in a given timeframe for one delivery channel and not across all the channels as a whole.

Frequency Caps are set under Campaign Limits in Settings > Setup: 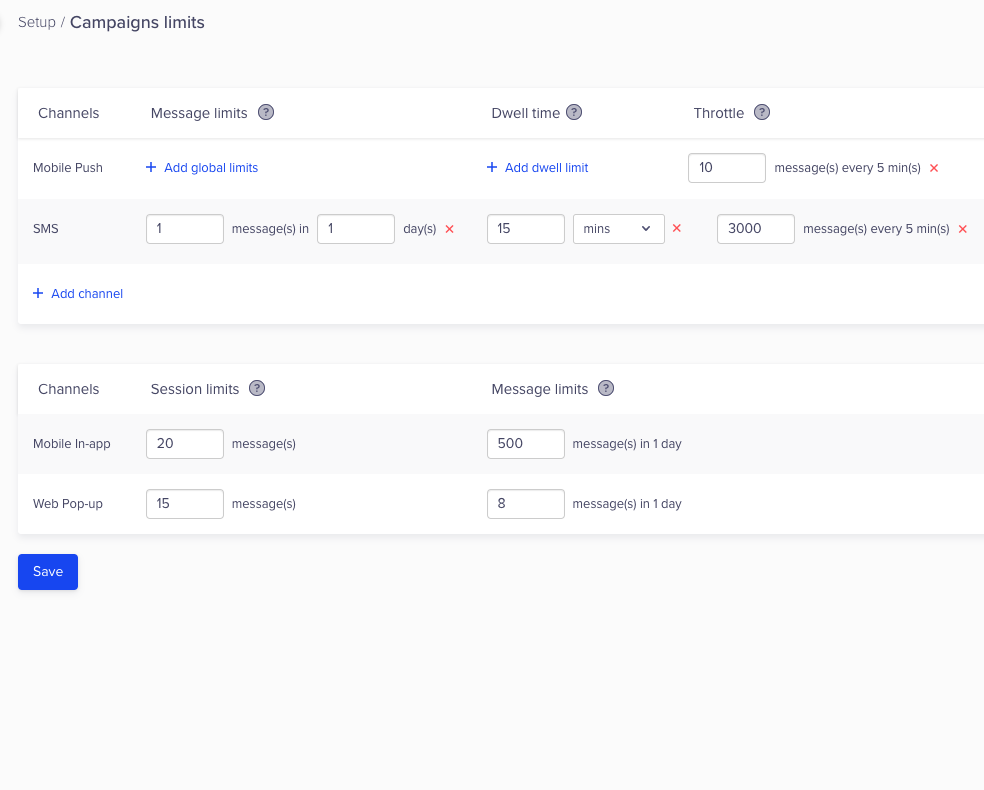 In the Error Reporting section of the campaign report, you can find the number of users who did not receive the campaign because of this frequency cap setting.

Updated about 1 year ago