Optimizing messages and campaigns is a crucial activity for any app marketer. Clevertap offers three ways to optimize everything you deliver:

A/B testing lets you compare up to three different versions of a message for any campaign. You can try different copy, creatives calls to action, or any combination of these to make sure you have designed the best message for each campaign.

Pick the size of the test audience to run and we do the rest. We determine the winner based on the number of views and then deliver the winning message to the rest of your target audience.

For any campaign, you need the content and creatives for each message. When you create a push notification campaign, you have an option to add up to three variants of any message to test which one performs best.

You can determine the size of the test to run after adding the desired number of variants.

Campaigns Sent to Past Behavior Segments

For campaigns sent to past behavior segments (grouping of users based on their past actions), you have two options: launch the A/B test to a percentage of your target audience or send out an absolute number of messages. In either case, we deliver the variants equally to the test audience. 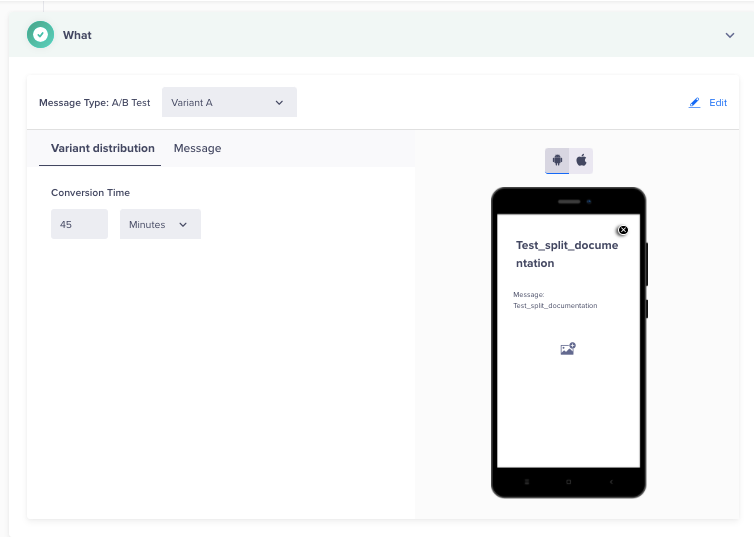 After the 300,000 messages have been delivered, we calculate the winning message over this test group based on the number of views.

We then automatically send the winning message to the remainder of your target audience which in this example is 1,700,000 users.

The following is a sample report: 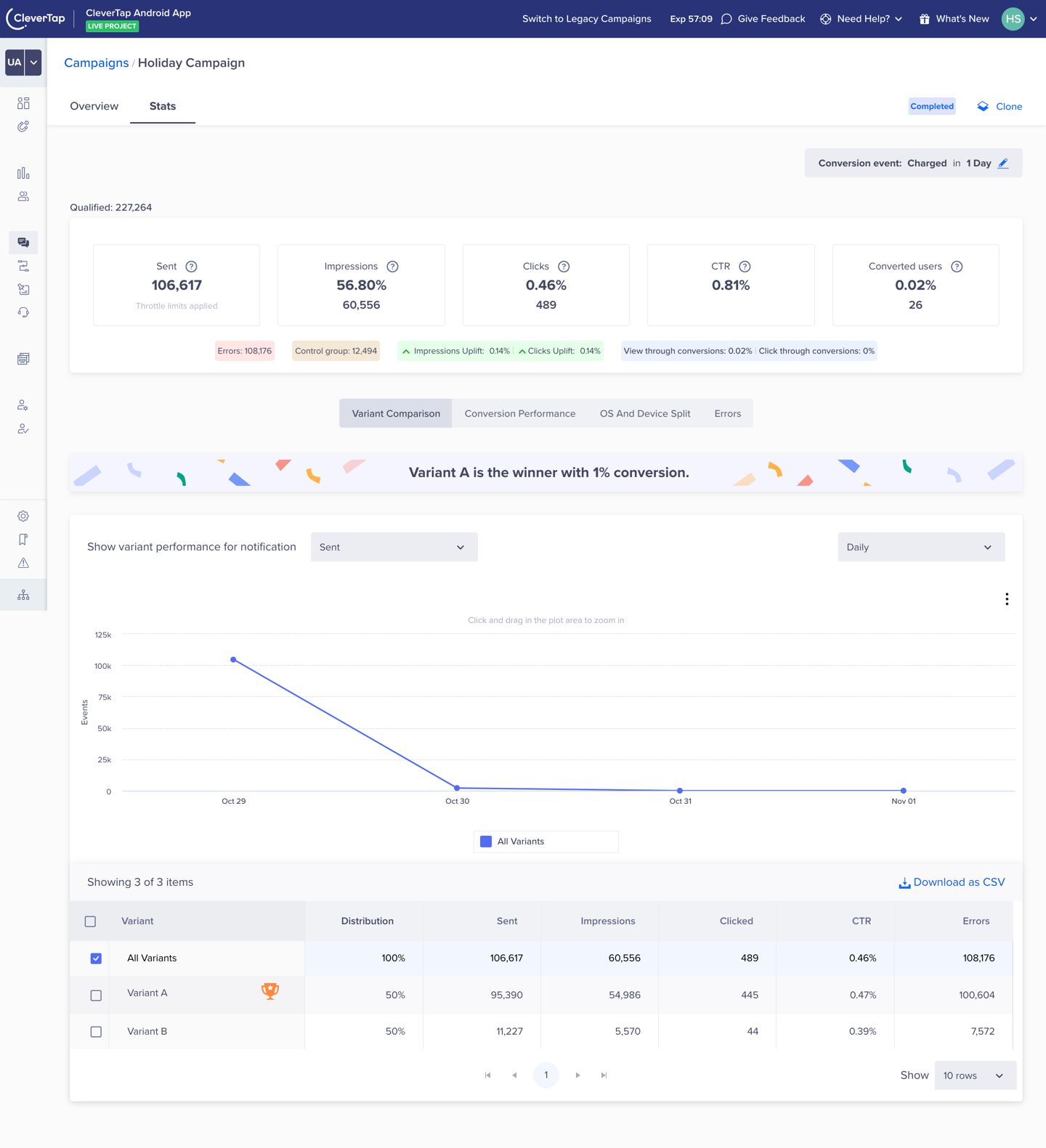 With campaigns sent to live user segments, campaign (triggered) messages are delivered immediately when a user’s activity matches the criteria that you have selected.

In this scenario, you want to send a message when the user has completed a booking or purchase. Since it is not possible to determine the reach of triggered campaigns upfront, you must decide how many of the total messages to send for A/B testing before a winner is declared.

If you select 500 users as your test audience, we alternate delivery of Variant A and Variant B as users qualify for the campaign. After 500 total messages are sent (Variant A – 250 and Variant B – 250), we decide the winner based on the number of views and only continue with this winning message for the duration of the campaign.

If your test group size exceeds the total number of users who ultimately qualify for that campaign, then no winner is be declared and each message variant is alternatively delivered for the duration of the campaign.

If all variants receive the same number of views, then Variant A is declared the winner.

For some campaigns, you want to send multiple variants of a message to your entire target audience without selecting a winner. With split delivery, you choose what percentage of your target audience receives each variant and we deliver them accordingly.

Here is how it works:

As with A/B testing, when creating the message for a campaign you can add up to three variants. With split delivery, you can decide what percentage of your audience receives each message variant. We deliver the messages in exactly this proportion for the duration of the campaign. 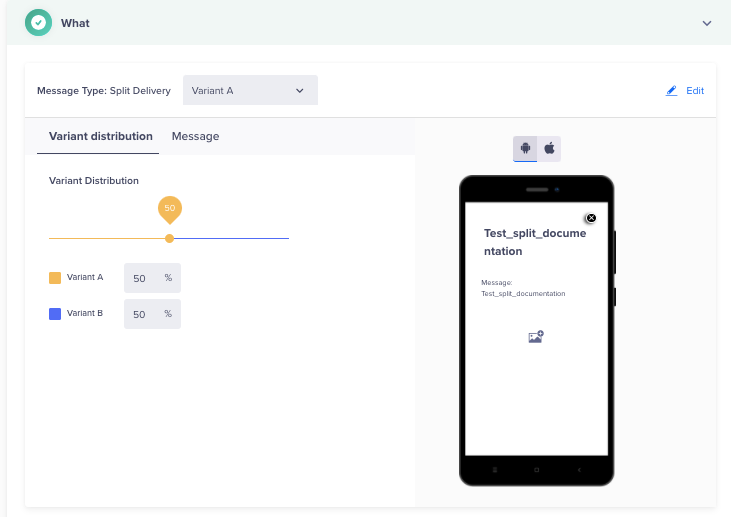 Deliver to a Subset of the Target Audience

Sometimes you want to send a message to only a subset of the qualifying audience (target reach) for a campaign or avoid sending it if the number of qualified users exceeds the specified number.

Here is how it works:

In the campaign creation flow, when you are determining who to send your message to under the Limits and Control Group section, select the option to limit delivery of the messages to the number you want.

The campaign limits can also be configured as follows:

A customer has a budget for distributing 1,000 discount coupons but the qualified user count is 10,000. If you select the safety check, the campaign does not run and prevents the sender from spending over budget.

CleverTap's email A/B testing feature lets you compare up to three different versions of an email to find the best-performing one. You decide the size of the test audience for the A/B test, we determine the winner based on the number of views, and then deliver the winning message to the rest of your target audience.

Creating an email campaign using the A/B testing feature follows a similar pattern to creating a normal email campaign. After choosing the segment to target and frequency of communication, you can run the campaign as an A/B test using the following steps.

We determine the winner based on the number of views and then deliver the winning message to the rest of your target audience.

If there is a tie between Variant A and B, we will send the email Variant A to the remaining 90% of the audience.

You are finished with setting up the A/B test portion of building your email campaign. Now, you can complete the rest of the steps similar to a normal campaign.

Using the message by user property type, you can create multi-variant campaigns. You can send a campaign based on the selected user property.

You can create up to 50 such variants in the same message. The default variant engage the users who have no value against the profile property.

You can also perform analysis and derive insights based on the variant of the notification sent. For analysis, you can filter the information based on the event property Variant for the notification-based events (Notification Sent, Notification Clicked, etc.) as shown in the following figures. You can download the list of users to whom a specific notification variant was sent, as well as save this query as a segment and use it for further action. 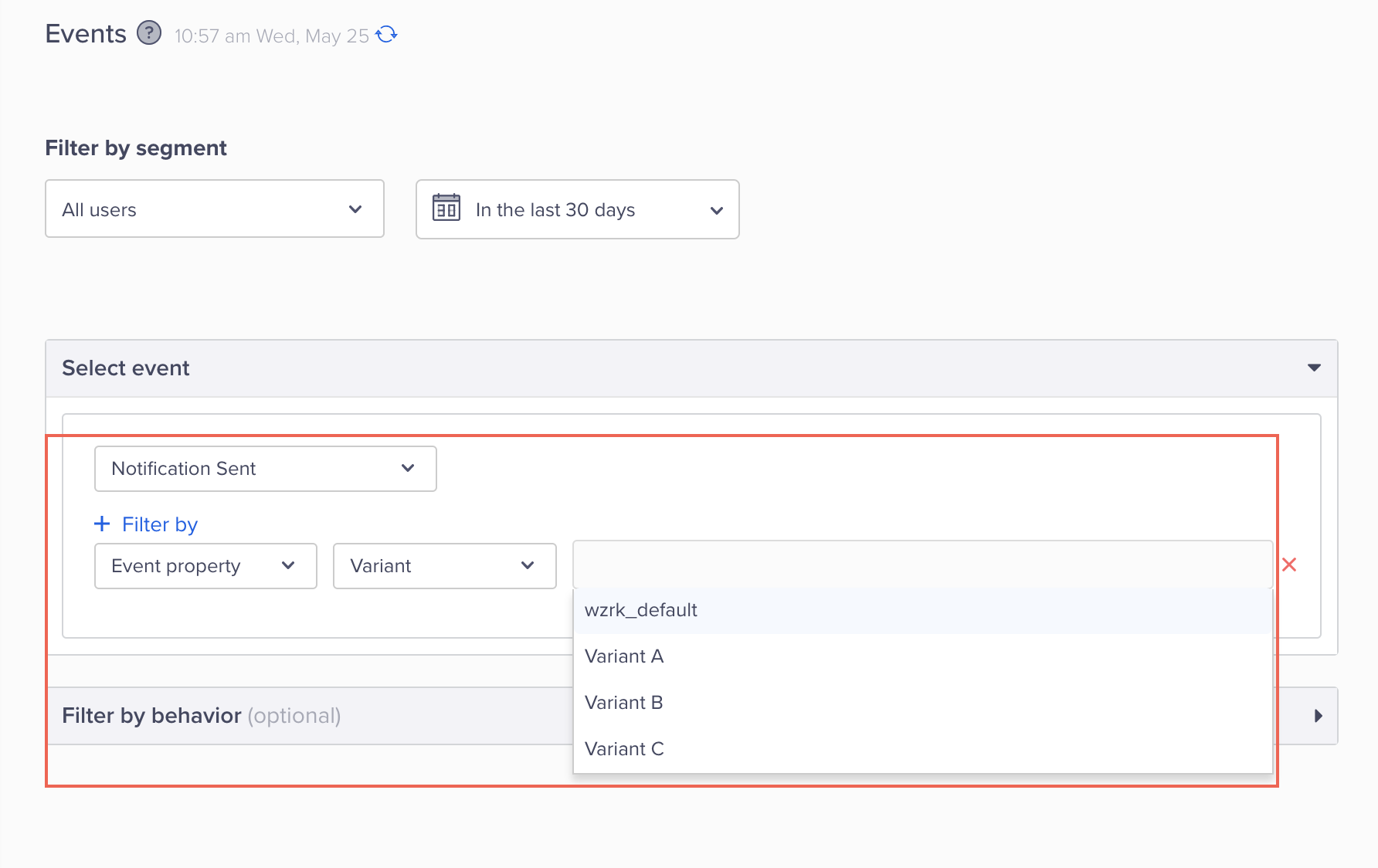 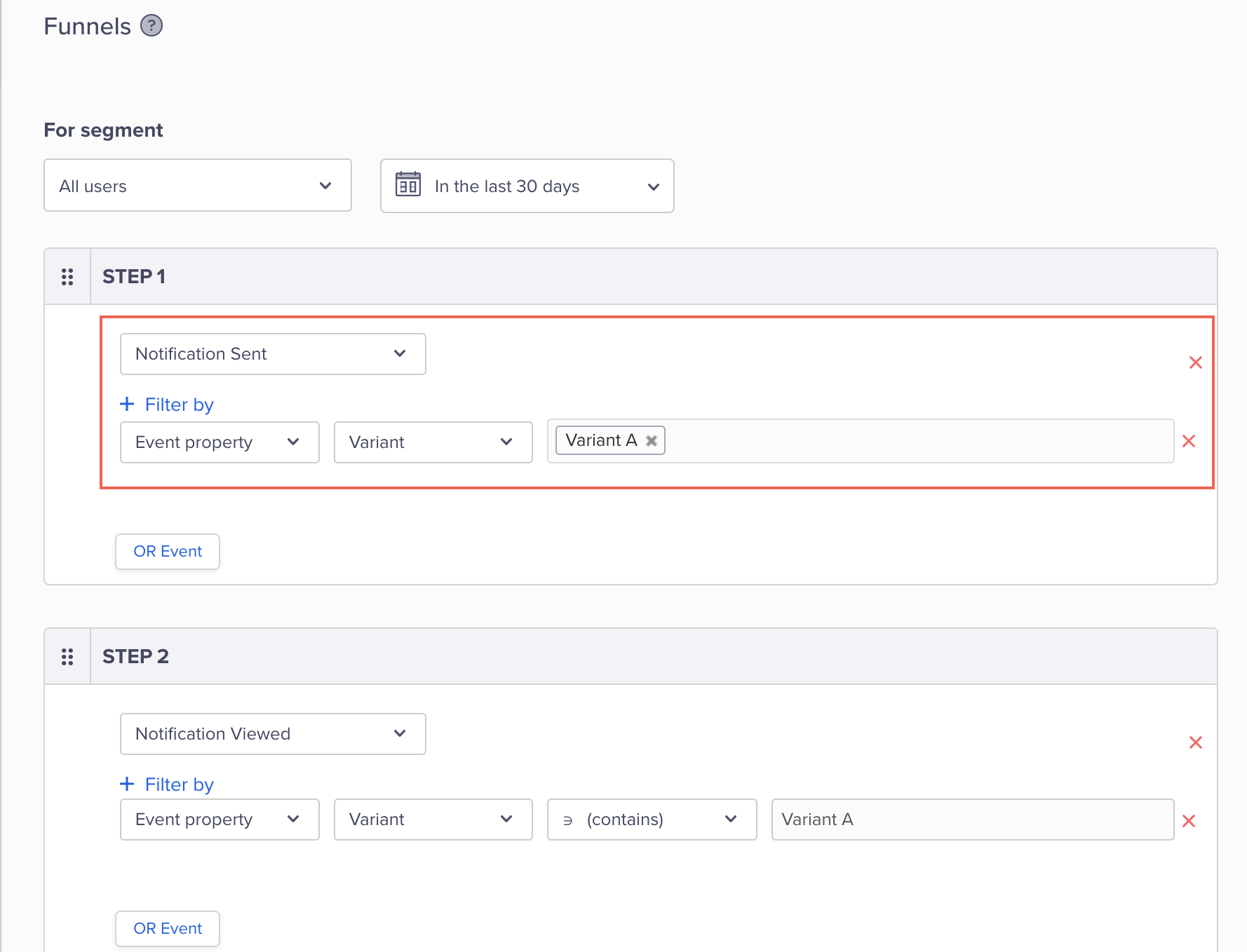